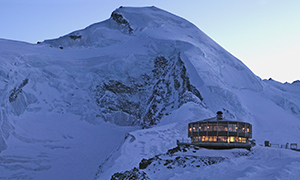 Nestlé scientists have discovered that cooking food at high altitude, where pressure is lower, can make it more intense in flavour, colour and aroma, as well as potentially improve the nutrient quality of food.

A group of scientists from the Nestlé Research Center (NRC) in Lausanne, Switzerland, travelled to the world’s highest revolving restaurant – the ThreeSixty in Saas-Fee, Switzerland – for a day’s cooking at high altitude, some 3,600 metres above sea level.

Back in the lab, at 833 metres above sea level, they repeated the cooking process and scientifically compared the results. Their conclusion – food cooked at high altitude both looks and tastes better.

The research is part of Nestlé’s exploration of how it can provide healthier, more pleasurable foods using natural processes without using artificial additives and enhancers. The results of the research have just been published in the Journal of Agricultural and Food Chemistry.

The scientists prepared three identical recipes for vegetable broths, one cooked high in the mountains, and two others in the lab – one at ordinary pressure and the other at high pressure - and discovered that the recipe prepared in the clouds had a very different flavour profile.

“Flavour is a key driver of food acceptance and consumer preference”, explains Dr. Candice Smarrito, the NRC scientist who led the study.

“So we prepared vegetable broths consisting of exactly the same quantities of turnip, carrot, leek and celeriac cooked at high, low and ambient pressure.

“The results were then analysed both in the laboratory using a range of analytical processes, and by a panel of tasting experts to see how the different combinations of pressures and cooking times impacted on the culinary quality and molecular and sensory profile of the preparations,” she explained.

The lower boiling point of water at high altitude and low pressure allows food to cook more gently, at a lower temperature. At 3,600m , for example, water boils at just 85°C .

Flavour is a key driver of food acceptance and consumer preference. Dr. Candice Smarrito, scientist at the Nestlé Research Center

Nestlé scientists have proved that this process maintains the food’s natural amino acids, carbohydrates and organic acids, as well as volatile compounds, such as aromas.

Having these elements preserved in the components of a finished dish makes the flavours, colours and aromas more intense, without the addition of a single flavour enhancer or additive, or even salt.

They found that low-pressure cooking reduces food weight loss and therefore increases the yield of vegetables.

It also leads to significantly richer broths in terms of amino acids, carbohydrates and organic acids, enhancing their non-volatile, volatile and sensory profiles.

In particular, the team noticed an enhancement of sulphur volatile compounds when boiling at lower pressure, which correlates with a greater leek aroma.

In this way, the researchers established that imitating the conditions of mountain cooking through low-pressure boiling might be used to enhance the flavour profile of culinary preparations, so increasing consumer preference.

This preservation might also extend to any thermally sensitive compounds, such as vitamins.

NRC scientists are currently carrying out additional research to identify the culinary preparations that might be enhanced, both in terms of the sensorial experience and the nutritional value, by this low-pressure cooking method.