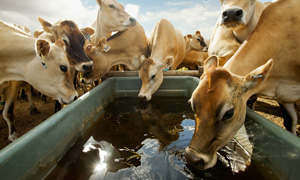 SAFE SOURCING: The initiative aims to ensure farm animals in the supply chain are well cared for

Nestlé has announced a major pledge to improve the welfare of the farm animals in its supply chain, following the signature of a partnership agreement with NGO World Animal Protection.

The agreement means that the hundreds of thousands of farms that supply Nestlé with its dairy, meat, poultry and eggs will have to comply with tighter animal welfare standards.

Nestlé, with its global purchasing footprint, also becomes the first major food company to form an international partnership with an animal welfare NGO.

World Animal Protection, which has been working with governments, communities and international agencies to improve animal welfare for more than 50 years, welcomed the agreement.

“Our decision to work with Nestlé is based upon their clear commitment to improving animal welfare and the lasting change this can have on millions of farm animals around the world,” said Mike Baker, the organisation’s Chief Executive.

Nestlé has some 7,300 suppliers from whom it buys animal-derived products directly - everything from milk for its range of yoghurts and ice-creams, to meat for its chilled foods and eggs for its fresh pastry and pasta.

Each of these suppliers, in turn, buys from others, meaning that Nestlé’s Responsible Sourcing Guidelines apply to literally hundreds of thousands of farms around the world.

“We know that our consumers care about the welfare of farm animals and we, as a company, are committed to ensuring the highest possible levels of farm animal welfare across our global supply chain,” said Benjamin Ware, the company’s Manager of Responsible Sourcing.

World Animal Protection has been working with Nestlé on how to specifically tighten and improve the Nestlé Responsible Sourcing Guideline (pdf, 2 Mb), which all suppliers must adhere to as part of the Nestlé Supplier Code (pdf, 2 Mb). Both of these build upon the Nestlé Commitment on Farm Animal Welfare (pdf, 2 Mb).

We know that our consumers care about the welfare of farm animals and we, as a company, are committed to ensuring the highest possible levels of farm animal welfare across our global supply chain Benjamin Ware, Nestlé's Manager of Responsible Sourcing

These now include, for example, spacing requirements for the rearing pens of certain species of animals, such as pigs and cows, to ensure they are not cramped and can engage in normal animal behaviour.

In addition, following the involvement of World Animal Protection, Nestlé’s guidelines also seek to minimise pain for farm animals by using veterinary practices that reduce pain, or avoiding the practices in the first place by different animal husbandry practices. An example would be the dehorning of cows. Cow horns are removed so that they do not injure other cows.

Nestlé has commissioned an independent auditor, SGS, to carry out checks to ensure the new standards of animal welfare are met on its supplying farms. In 2014, several hundred farm assessments have already been carried out worldwide. Some of these checks are also attended, unannounced, by World Animal Protection representatives whose role is to verify the auditors.

When a violation is identified, Nestlé will work with the supplier to improve the treatment of farm animals to ensure they meet the required standards. If, despite engagement and guidance from Nestlé, the company is unable or unwilling to show improvement, it will no longer supply Nestlé.

The World Animal Protection agreement forms part of Nestlé’s broader Responsible Sourcing activities. These cover human rights, health and safety and environmental issues, and build upon multiple commitments, including, for example, a pledge that by the end of next year, 40% of the company’s key commodities - including meat, poultry, eggs and dairy will be fully traceable.