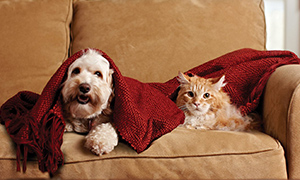 In order to help pets maintain their mental capacities into older age, Nestlé Purina, one of the world’s leading pet care producers, has developed a nutritional supplement consisting of fish oil and antioxidants.

Nestlé Purina will begin adding the nutritional supplement, known as Brain Protection Blend, to select Purina products for cats and dogs in the next 12 to 18 months.

“By taking a more proactive approach, we may be able to slow the brain’s decline often experienced among pets as they get older,” said Dan Smith, Nestlé Purina’s Vice President of Research and Development.

A Nestlé Purina study on the effects of Brain Protection Blend on dogs is expected to be published in the coming weeks.

The Brain Protection Blend supplement targets risk factors linked to brain ageing and is designed to be eaten when a pet is in middle age. Among the other key ingredients in the supplement is an essential amino acid known as arginine.

According to an April 2014 survey conducted by market research firm Penn Schoen Berland and issued by Purina, more than 37 percent of dog owners have a dog older than seven years of age. This means a large group of pet owners may soon face issues related to their pet’s health due to cognitive decline.

Pet owners often associate their pet’s mobility problems to physical issues that come with old age without realizing that many of those issues actually stem from cognitive decline. This can result in pets forgetting how to perform normal functions such as using a litter box or finding a food bowl.

“Humans understand the need for additional nutrients to live healthily, so it’s imperative that pet owners are aware of similar nutritional breakthroughs available for their pets that help slow the changes associated with ageing,” Mr. Smith said.

The launch of the Brain Protection Blend is the second phase of Purina’s two-pronged approach to addressing cognitive decline in pets using research techniques that focus on adding nutritional enhancements to pet food.

The first phase centred on developing neuron-targeted nutrition with a blend of nutrients sourced from vegetable oils, such as coconut oil, and was focused on improving memory function in older dogs.

Purina is widening its research focus to finding nutritional options that will strengthen pets’ cognitive abilities at a younger age and promote long-term brain health.

Nestlé Purina scientists, veterinarians and nutritionists have been studying the effects of ageing on pets since 1986, when Purina began the breakthrough “Lifespan Study” to look at canine diets.