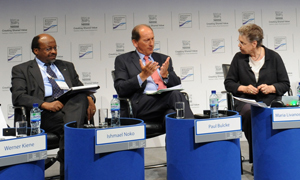 JOIN THE EVENT LIVE: Join the discussion and ask panellists questions via a live webcast from 05h00 CET until 13.30 CET, on Monday, November 5.

The role of business in development is discussed at Nestlé’s Global Creating Shared Value Forum 2012 in New Delhi, India on Monday.

Join the discussion and ask panellists questions via a live webcast from 05h00 CET until 13.30 CET, on Monday, November 5.

The forum aims to raise awareness of Creating Shared Value (CSV), which underpins Nestlé’s corporate business strategy – creating value for its shareholders while at the same time creating value for society, particularly for the communities in which the company operates.

Nestlé’s Chairman Peter Brabeck-Letmathe, Chief Executive Officer Paul Bulcke and the Head of Zone Asia, Oceania and Africa Nandu Nandkishore are taking part in the event along with representatives from government, civil society and business.

The CSV Forum, co-hosted with the Federation of Indian Chambers of Commerce and Industry (FICCI), seeks to highlight the value of CSV particularly in South Asia.

The report documented the creation of shared value by Nestlé at each stage of the value chain from agriculture and rural development, through to delivering products to customers and disposing of waste. This thinking was developed with the support of Harvard University’s Professor Michael Porter and Mark Kramer.

Nestlé’s CSV reports (pdf, 3 Mb), published annually, document how the company acts to produce value for its business while directly benefiting consumers, employees and suppliers, their families and their communities.

Nestlé has focused its Creating Shared Value efforts and investments on three areas nutrition, water and rural development which are core to its business activities.

CSV is built on strong commitments to environmental sustainability and compliance with laws, codes of conduct and the Nestlé Business Principles.

The winner of this year’s Nestlé Prize in Creating Shared Value will be announced at the event at 13.30 CET on Monday.

The CSV Prize highlights examples of Creating Shared Value by funding innovative and commercially-viable initiatives to scale up and achieve financial sustainability.

Following the announcement of the winner, nominations will be opened for the 2014 Nestlé CSV Prize. The closing date is March 31, 2013.

A recent survey carried out by the Third World Centre for Water Management led by Professor Asit Biswas has illustrated how Creating Shared Value is working.

The study focused on how Nestlé has impacted on the village of Moga since the company built its first Indian factory there in 1961.

It revealed how Nestlé has successfully established relationships with the community in Moga, which in turn, have led to the development of milk production in the region, generated employment and improved access to drinking water and sanitation.

For the first time in its three-year history the Nestlé Global CSV Forum is taking place in an emerging market.