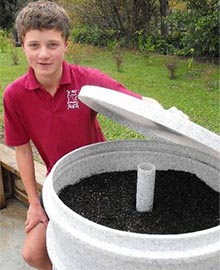 "I manage the worm farm with Tane Guiniven. It's good the school is going in an organic direction and that we use the worm leavings to fertilise the gardens." Patrick Takurua.

This week, Marton-based Nestle Purina safety health and environment manager Aarron Gilbert visited the school to take a look at the octagarden that was built with the help of a $20,000 grant from Nestle.

Mr Gilbert said the programme had now been running for nine years and every year community organisations were invited to apply for the funding.

Kindergartens and schools in the Whanganui/Rangitikei region had benefited from the project over the years, but it was open to other organisations that wanted to enhance the environment.

Hunterville School principal Stephen Lewis said the school was grateful for the funding for the project that started out as an outdoor classroom then developed into the octagarden that was given its name because of its shape.

The ground area has been concreted and Greg Carlyon, a school parent, built the raised gardens at home then delivered them to the school.

Horizons donated 280 native plants to the school and on the last day of the 2011 school year, all of the students planted a tree in the area bordering the octagarden.

A plant nursery that was sponsored by Forest and Bird 10 years ago has been shifted to the area. The students raised the seedlings and then planted them around the town.

A garden shed is to be built and power and lighting cables will be laid to the area.