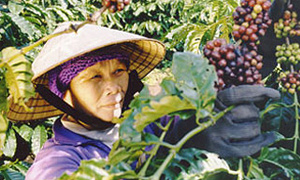 COMMITMENT: Improving coffee productivity through better farming practices over the next five years.

Nestlé has reaffirmed its commitment to support more than 20,000 coffee farmer households in Vietnam.

The company will continue to develop sustainable coffee farming in the country in partnership with the Vietnamese Ministry of Agriculture and Rural Development.

Measures include improving coffee productivity through better farming practices and distributing high-yield, disease-resistant plantlets over the next five years.

The initiative is backed by Nestlé’s global Nescafé Plan which it extended to Vietnam last year.

As part of the plan Nestlé looks to source 30,000 tonnes of coffee from around 16,000 Vietnamese farmers annually, helping them obtain better prices and a steady income.

This is part of an approach to business Nestlé calls ‘Creating Shared Value’, which aims to create value for the company’s shareholders at the same time as for those communities where it operates.

Nandu Nandkishore, Nestlé’s Executive Vice President and Zone Director of Asia, Oceania, Africa and the Middle East, stressed the importance of Nestlé Vietnam at an event to reaffirm its presence in the country.

“We will continue to contribute and to enhance the lives of people in Vietnam and around the world.” said Mr Nandkishore.

We will continue to contribute and to enhance the lives of people in Vietnam and around the world. Nandu Nandkishore, Nestlé’s Executive Vice President and Zone Director of Asia, Oceania, Africa and the Middle East.

Last year the company announced an investment of USD 270 million (over CHF 230 million) in a new coffee factory in Dong Nai province.

t will produce products under the Nescafé brand for both local consumption and export.

The first phase will begin in November 2012 and looks set to create 170 new jobs once fully operational next year.

Nestlé sources its coffee directly from its other markets in South East Asia such as Thailand, China, Indonesia and the Philippines.

It is also sources coffee from farmers directly in Brazil, Colombia, Côte d’Ivoire and Mexico.

The company operates five factories in Vietnam and employs more than 1,500 people nationwide.