Skip to main content
How many pieces of packaging do you recycle every year? You may have no idea, but there are few more important questions for the future of our planet.

Is that packaging recyclable? It’s a surprisingly complex question!

Nestle Oceania Head of Packaging Jacky Nordsvan said that there are misconceptions about recyclability.

“Many people think that just because a package is made of a certain material, it must be recyclable,” Jacky said.

“In fact, whether an item can be sorted properly by recycling machinery depends on much more than just the material,” she said.

Jacky said that packaging specialists also need to look at colour, weight, shape and size before they can be certain whether packaging is recyclable.

“It is our job to ensure less packaging is used, and what is used, is fully recyclable. We have made strong progress on our journey to make 100% of our packaging recyclable or reusable. While there is still a way to go, I am confident we are up for the challenge.”

As well as working to create packaging for the future, Nestlé is rolling out the Australasian Recycling Label (ARL) on its locally controlled packs. The ARL is on-pack information that shows people which bin to recycle their packaging in.

Even small changes can make a big difference.

Packs with tamper evidence seals – those little pieces of plastic snapped off the pack when you open it – proved to be a challenge. While the plastic itself is recyclable, once they are ripped off, the seals themselves are so small that they slip through sorting machinery and head to landfill.

Our packaging designers rose to the challenge, producing a new design for Allen’s lolly tubs.

The new design incorporates the tamper evidence seal into the lid in such a way that it can’t be fully separated from the tub when it’s opened. The entire lid – including the seal – can now be recycled in household plastic recycling.

Clearing up confusion on the NAN Toddler tin

Recycling the NAN Toddler tin was once a complex process as there are a number of different pieces of packaging – the tin, the lid, the tab, the foil seal and the scoop. All the items are made of different materials, and it was a bit confusing to understand exactly how to recycle each piece properly.

Putting the Australasian Recycling Label (ARL) on the pack provided the ideal opportunity to clarify this.

The ARL clearly shows that the tin, lid and scoop are recyclable – and the foil seal is also recyclable if the additional instructions noted are followed. In this instance, the foil needs to be made into a ball for it to be recyclable. If foil is left flat, it may end up in the wrong part of the recovery facility. The tamper evidence tab is the last piece remaining, as it is too small for automated recycling systems to handle, it is the only part that should go in the bin. The next step will be to integrate the tamper evidence tab into the lid, so that it can be recycled.

Coffee lovers can now enjoy their Nescafé Cappuccino dusted with chocolate powder knowing that the chocolate topping container can head to the right waste stream – thanks to some simple packaging modifications.

We identified that the pigment used to colour the plastic for the chocolate topping container meant that the containers couldn’t be detected by sensors. This made the container invisible, so it went to landfill instead of recycling.

A slight modification to the colour, and the problem was solved. Using a lighter pigment that sensors will pick up meant that the containers won’t disappear between the recycling cracks. 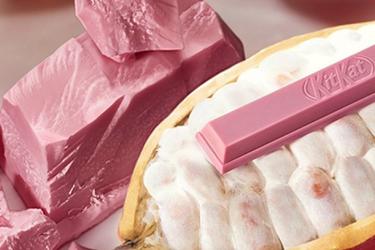 Innovation
To The Top