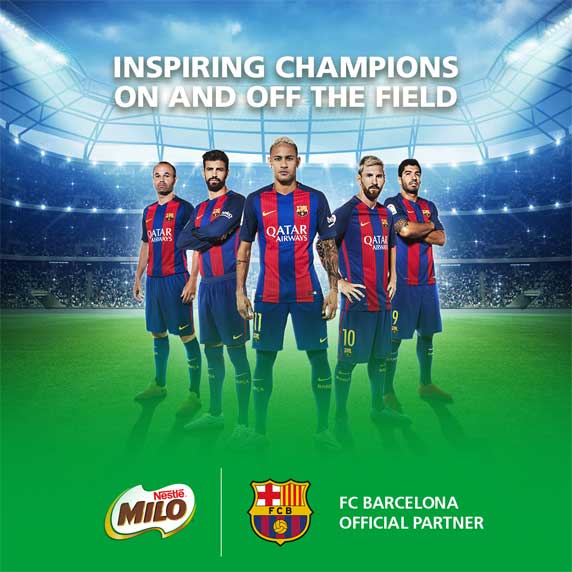 Milo, the iconic Australian drink born and bred on the NSW mid north coast over 80 years ago, has signed a partnership with FC Barcelona - one of the world’s most famous football clubs.

FC Barcelona, home to some of the most successful soccer players in the sport’s history, signed a four year deal with Milo this week to help promote healthier lifestyles and highlight the importance of physical activity to young people across Oceania, Africa, Asia and Latin America.

The global partnership will make Milo the official tonic drink food of FC Barcelona. It’s a long way from Smithtown on the mid north coast where Milo has been made since it was invented by Thomas Mayne in 1934 as tonic food for children during the Great Depression.

Today, Milo is sold in more than 40 countries around the world and over 400 million cups are consumed every day.

Milo runs grassroots sports programs for young people around the world, with around 22 million children currently involved in sport and nutrition projects delivered by Milo. In Australia, this includes Milo Cricket, which more than 820,000 children play every year.

“By educating young people about the importance of sport and physical activity as part of a healthy lifestyle, we can build a better future for the next generation,” he said.

Mark Mackaness, General Manager Dairy in Australia, said it was an honour that Milo shared a similar vision with FC Barcelona to promote healthier lives. “We are so very proud of Milo and its journey through Australian households over the past 80 years as a nutritious drink.”

For FC Barcelona, the partnership is an opportunity for the club to reinforce that playing sport from a young age is key to help children build a healthier future for themselves.

“Nestlé Milo, like FC Barcelona believes in the importance of playing sport from a young age as a key tool for learning essential values for children’s development,” said Manuel Arroyo, Vice President – Marketing and Communication at FC Barcelona.