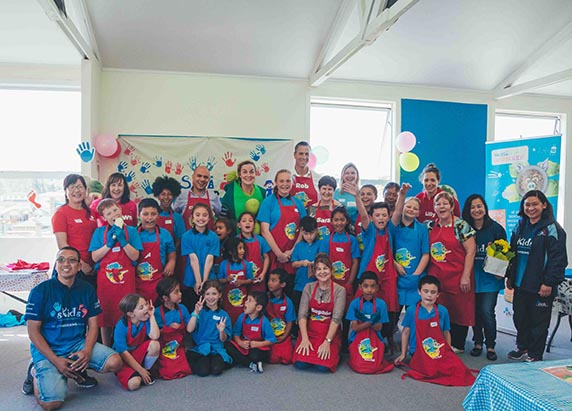 Kids at Don Buck Primary School went up against Olympic Athlete Rob Waddell in a cooking face-off and battled it out to produce the best selfie food art to celebrate the launch of a new partnership between Nestlé Healthy Active Kids, and sKids, the largest private provider of out of school care in New Zealand, and their FoodStorm cooking programme.

Competitors were challenged to create the ‘Selfie Wrap’ recipe and battled it out with the assistance of the sKids sous chef team to create the best selfie made out of vegetables. Rob Waddell was judged to be winner of the best ‘Selfie Wrap’ and now has $1000 to donate to the charity of his choice.

The ‘Selfie Wrap’ is one of ten new recipes that have been developed for the “Collector’s Edition” for the new Nestlé Healthy Active Kids FoodStorm module which will help see more than 1000 kids across New Zealand enjoy cooking classes with a difference during after-school care.

Rob Waddell is passionate about instilling healthy eating habits for young children. As a parent and athlete, he is aware of the value in getting children involved in cooking so they have the ability to make healthy snacks and meals for themselves and their family.

“Good food, portion size and being well-hydrated is critical no matter what we are doing in life. I think it’s great that kids have the opportunity to learn about food and nutrition in a fun and engaging way. I’m hoping to learn a thing or two!”

sKids Marketing Manager Rebecca Woolfall believes it’s a great example of two community focused organisations working together to share their expertise, networks and resources to produce a programme that kids and their families will all benefit from now and into the future, at no extra cost to parents.

“After school care is a necessity for so many families, particularly now given both parents usually work. sKids, being a network of small businesses committed to our communities’ health and wellbeing, are honoured to provide that care,” said Woolfall.

“Our new Nestlé Healthy Active Kids FoodStorm module is a fantastic opportunity for kids who may not have had the opportunity to cook before to get excited about cooking and see how easy it is to prepare healthy and affordable food that they enjoy eating.”

“In May 2018, Nestlé announced its global 'Nestlé for Healthier Kids' initiative which aims to help 50 million children worldwide lead healthier lives by 2030 by further development of healthier products and advice for families on nutrition and exercise,”

“Since 2004 our programmes to support the health and wellbeing of Kiwi children and young people have touched over 400,000 Kiwis nationwide. By partnering with sKids, we are continuing our commitment to a healthier future for Kiwi kids, their families and communities together.”

The Nestlé Healthy Active Kids FoodStorm modules are approved by the Heart Foundation and deliver nutrition learning outcomes. Each module teaches kids about the importance of healthy eating with topics including “eat your water” and “fun with portions” while getting hands-on experience with food preparation and cooking skills.

Nestlé’s support has boosted the number of sKids centres participating in the FoodStorm programme by up to 40%. For the first time ever, over 65 sKids sites nationwide will be teaching the same recipes and delivering consistent nutritional messages over Term 4 – it’s a Nestlé Healthy Active Kids FoodStorm revolution!